Norway has always been on my  ‘to visit’ list; I mean this country has more mountains and lakes than anywhere else in the world! It felt like there was a mountain or lake everywhere you turn. Absolutely beautiful!

My wanderlust and adventure kicked in again and I searched and found that the closest airport to the kjeragbolten and Pulpit rock was Stavanger. Stavanger it is.

7:30am the day next day, we were at the bus station in Stavanger, even though we almost missed it, as we only got in around midnight. The bus was full, some people weren’t even allowed to get in because they hadn’t pre-booked their tickets.

I mean I knew I was going hiking and it was going to take some time to get to the main attraction, Kjeragbolten, but I didn’t think that the journey there was going to be that challenging! 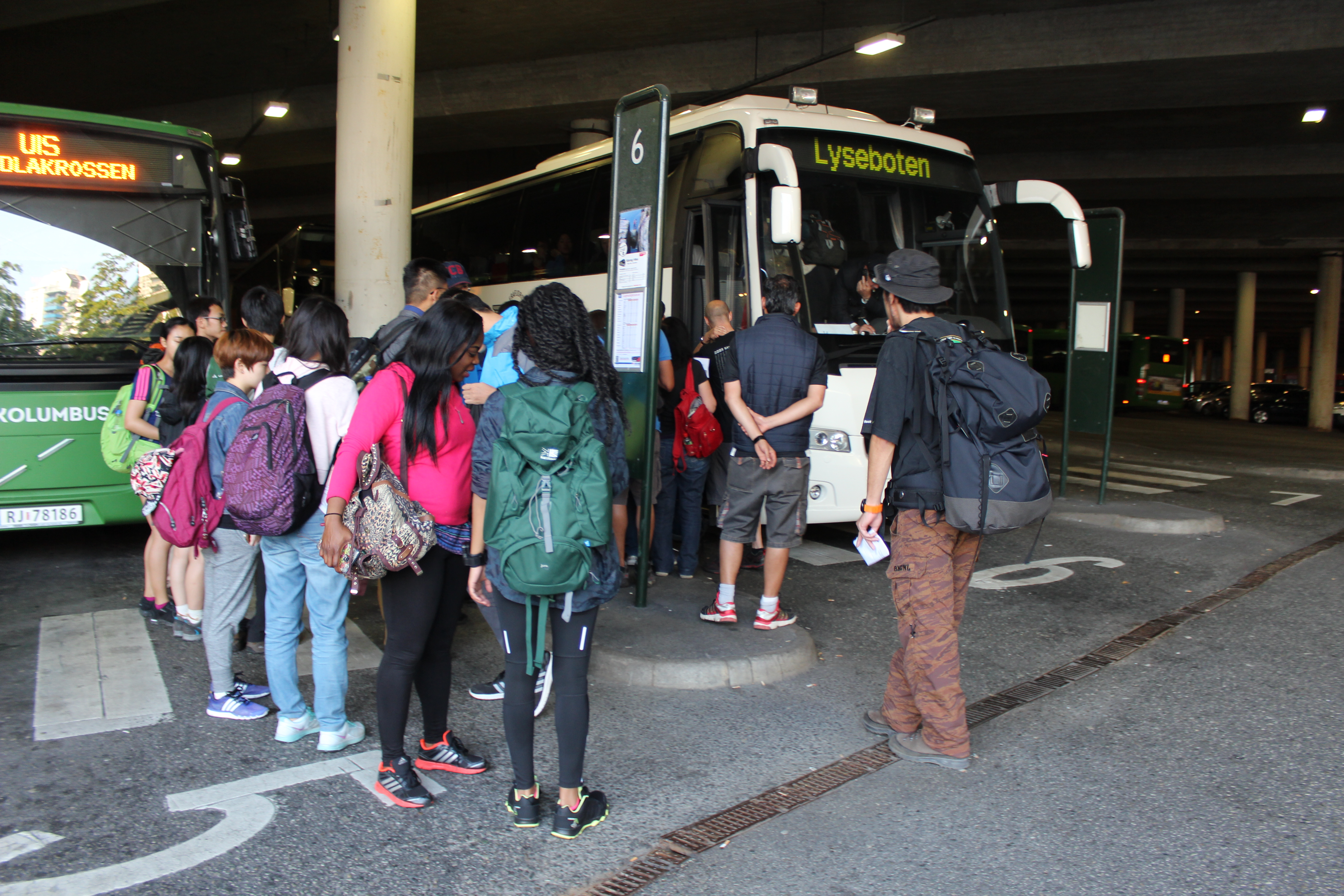 We had a mini 15 minutes toilet and snack break on the way and I managed to get a slice of chocolate cake. I wished I carried my Nigerian bread with me from London; it would have come in very handy. 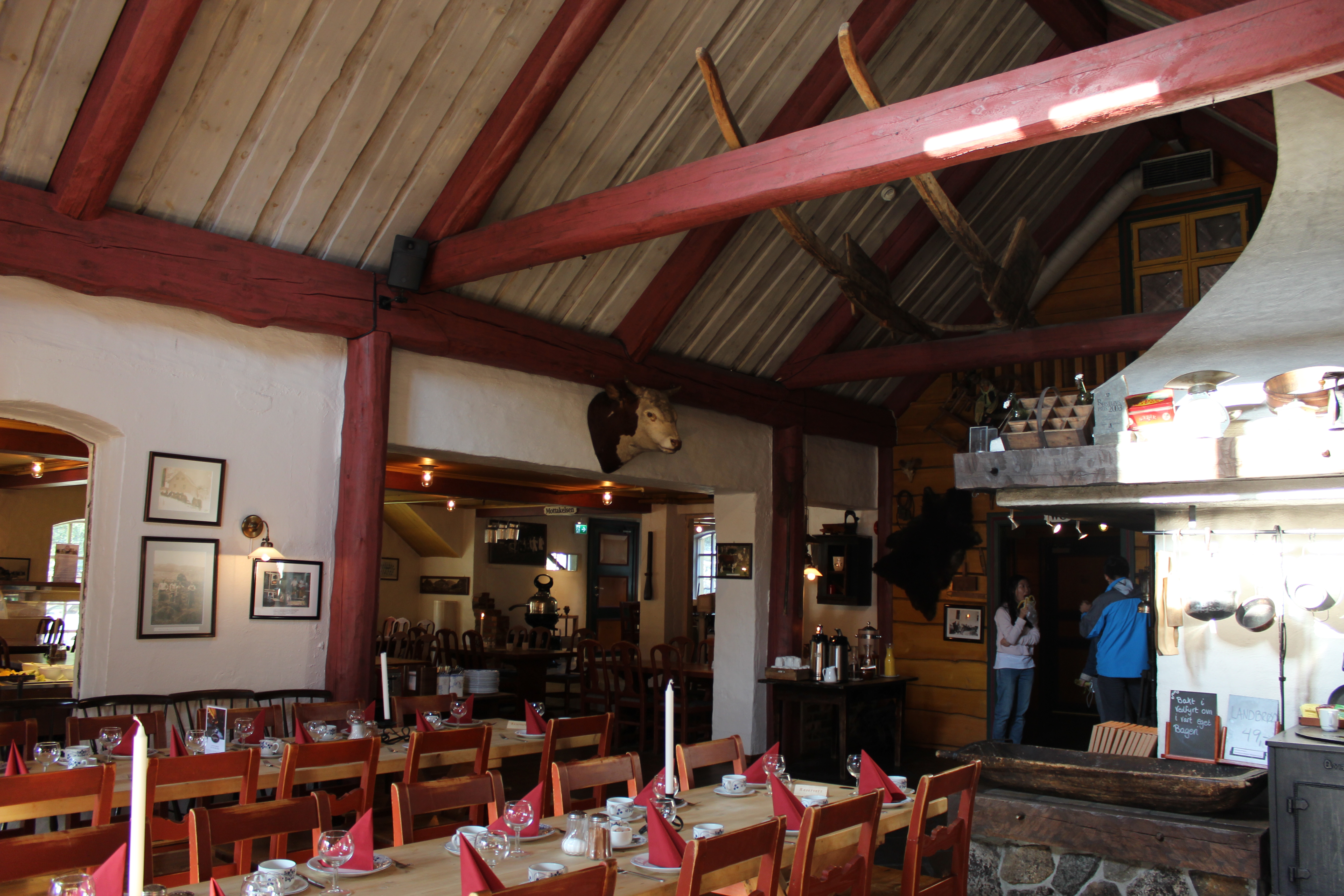 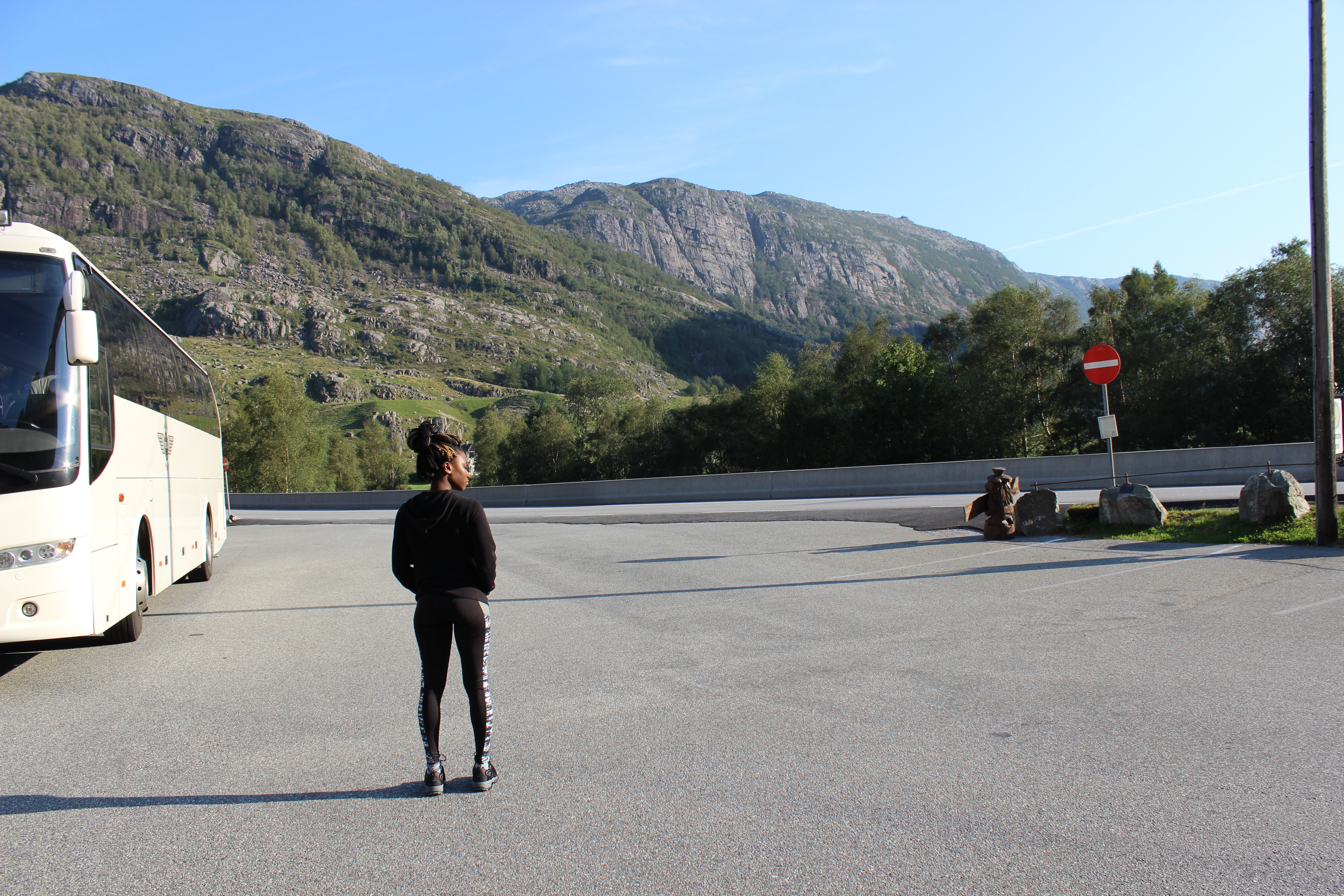 We finally reached the start of the Hike!– 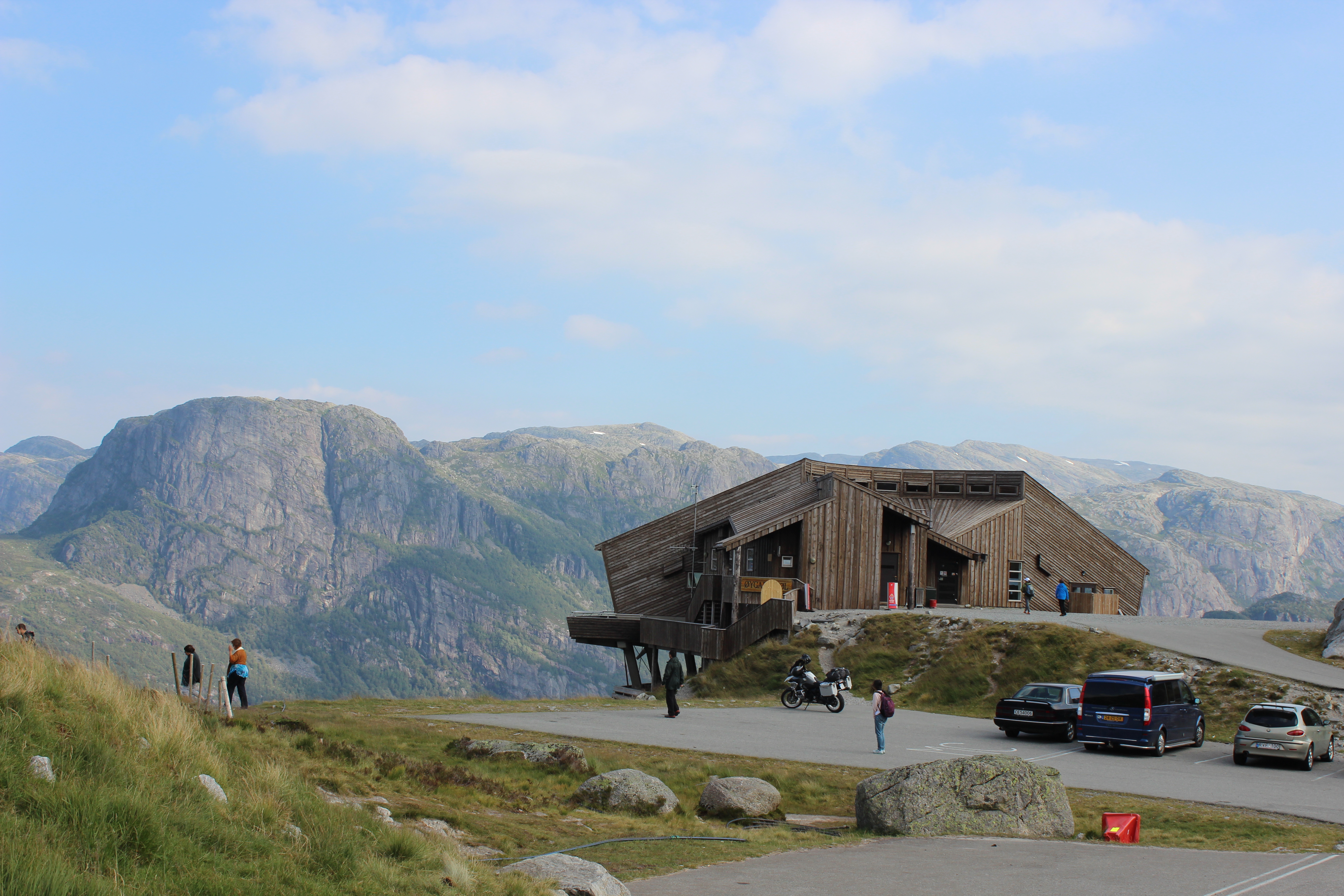 But just before we start, A few ‘I have arrived’ pictures, it is mandatory. 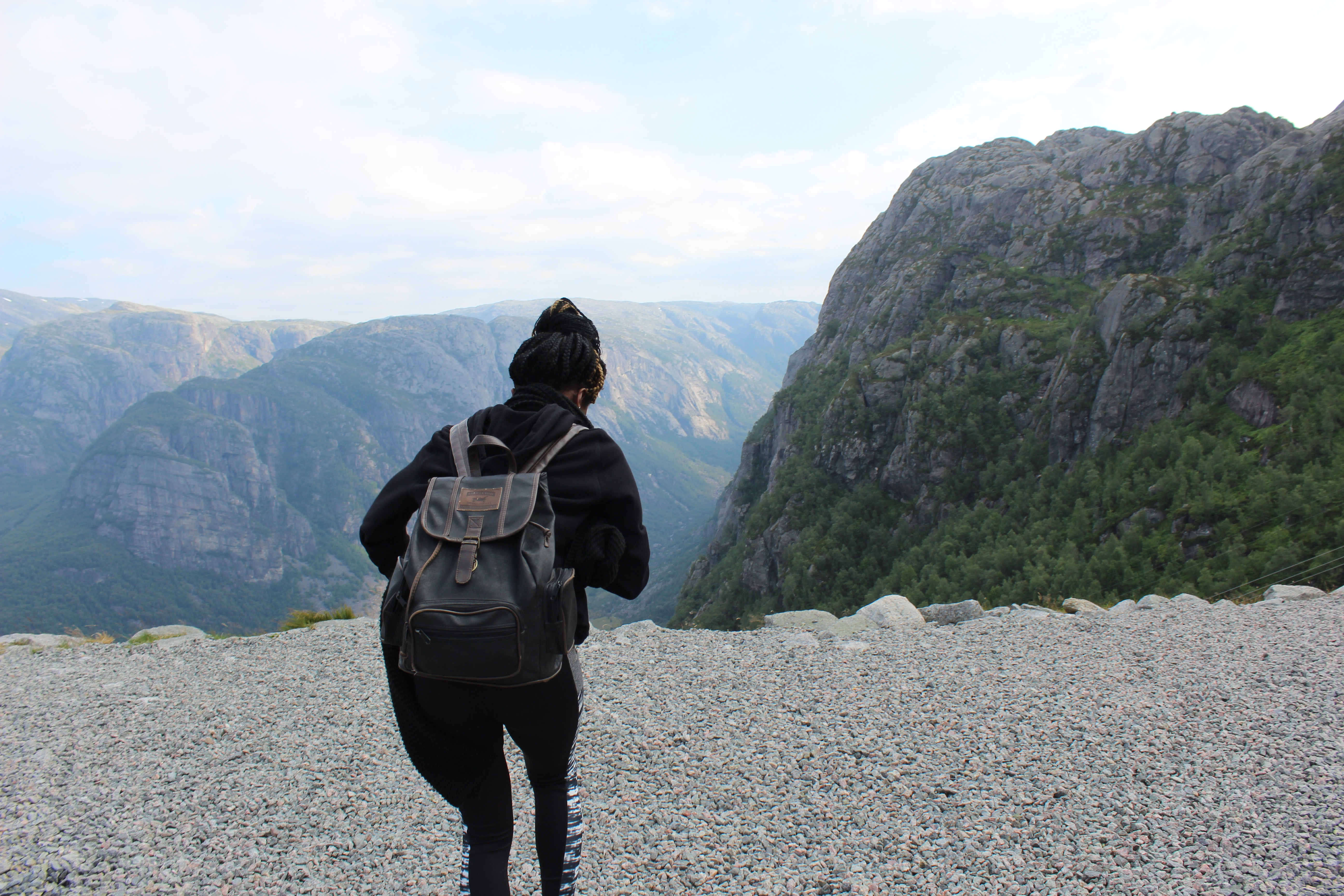 No tour guides, all we got were ‘T’ markings on rocks to guide us to the notorious KjeragBolten and some information on a notice board. 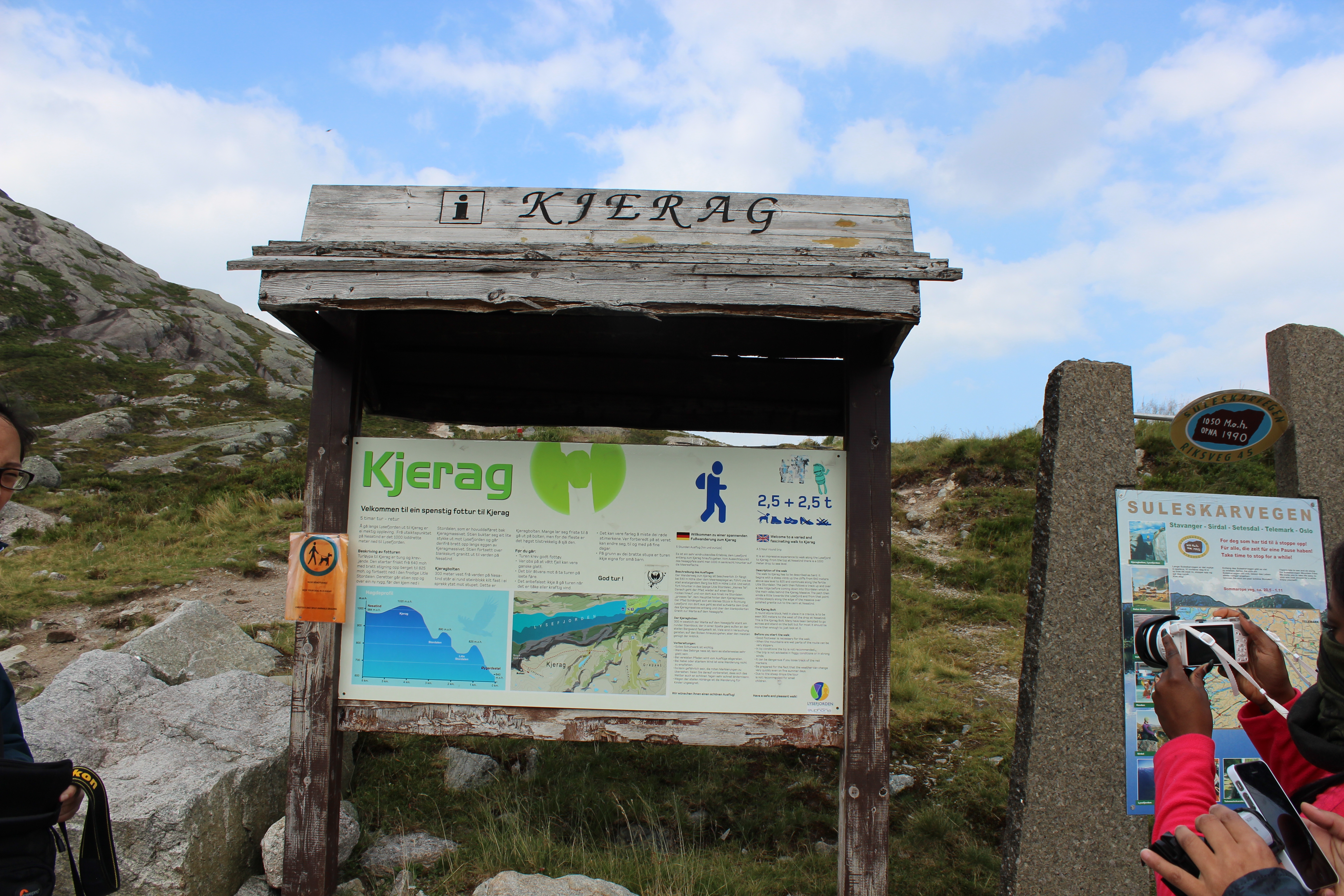 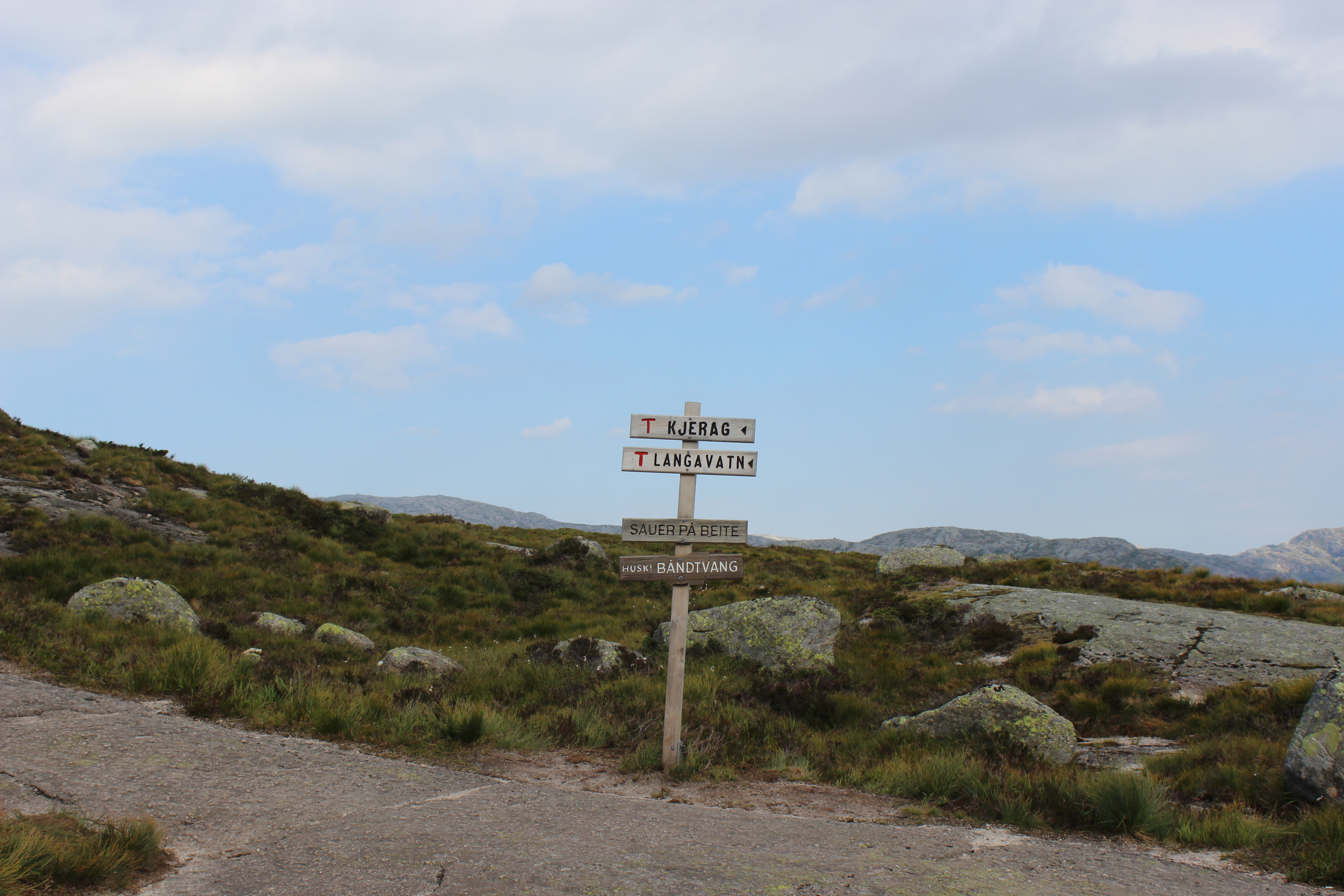 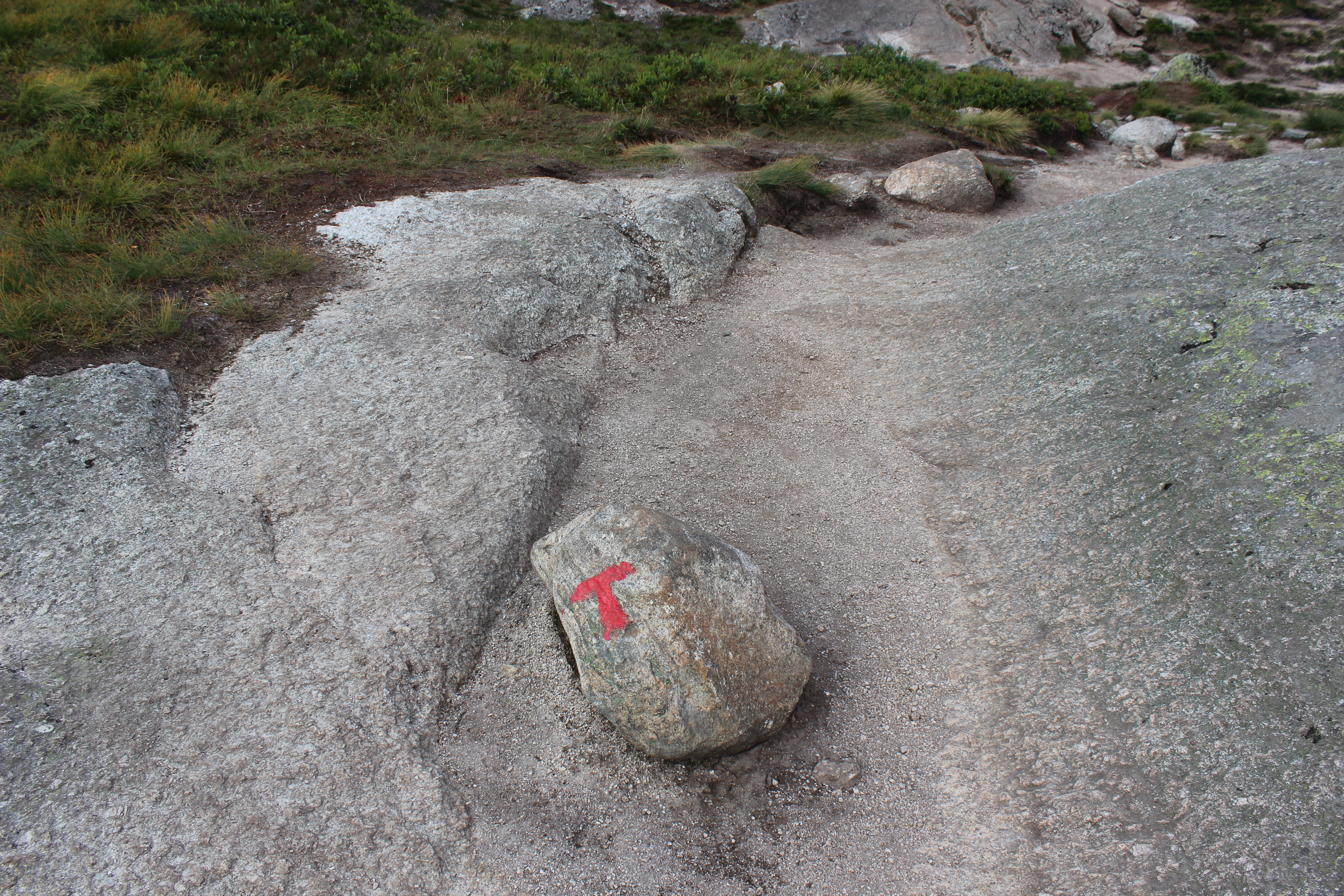 5 minutes in. My Friends were already dying. I tried to warn them that this was going to be a challenging trip. Listen to me people!

Are we there yet?? 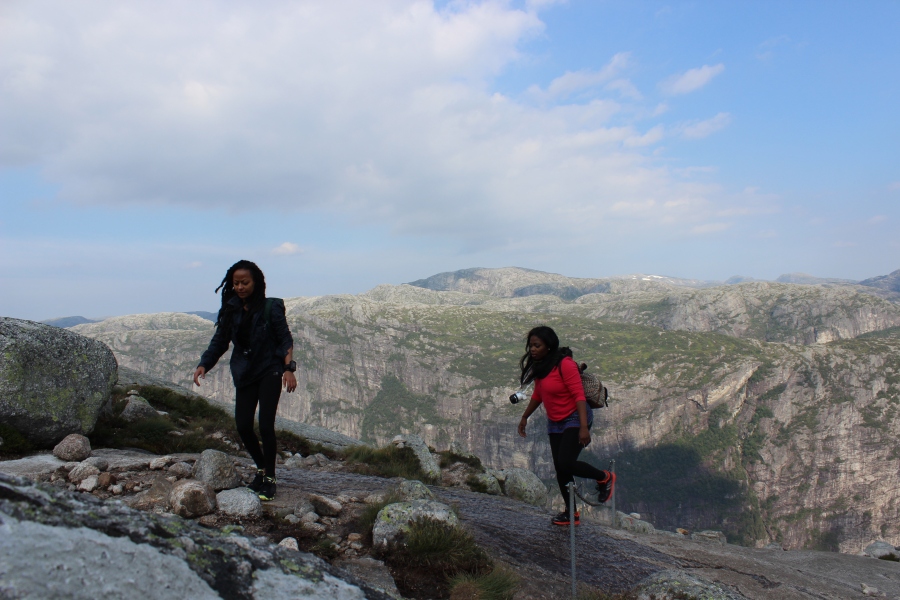 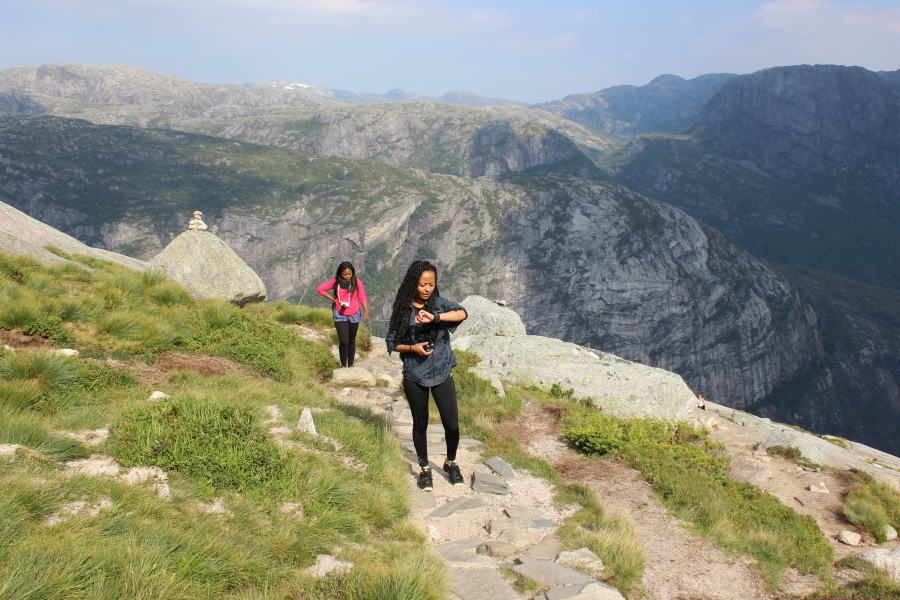 Took a few short breaks to cool off , take a few pictures e.t.c 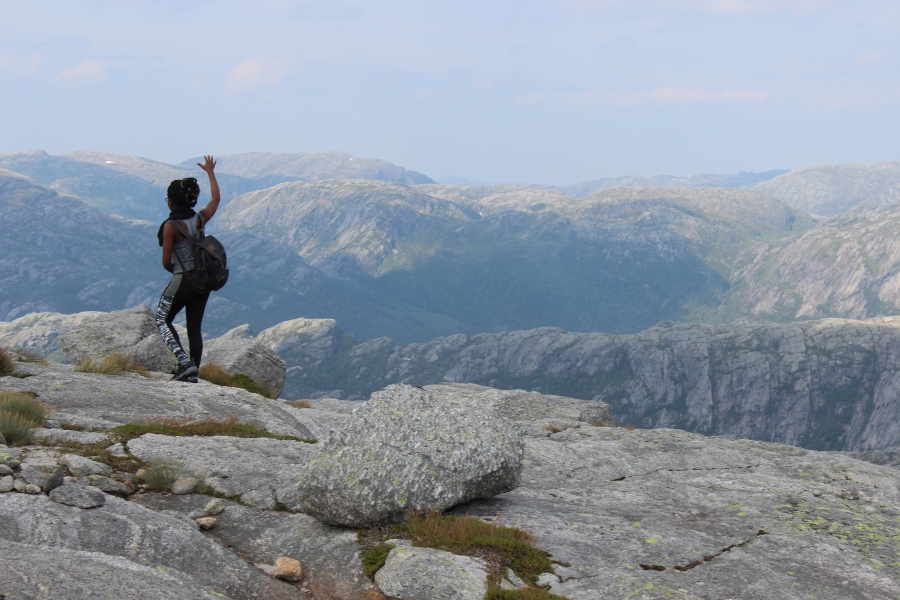 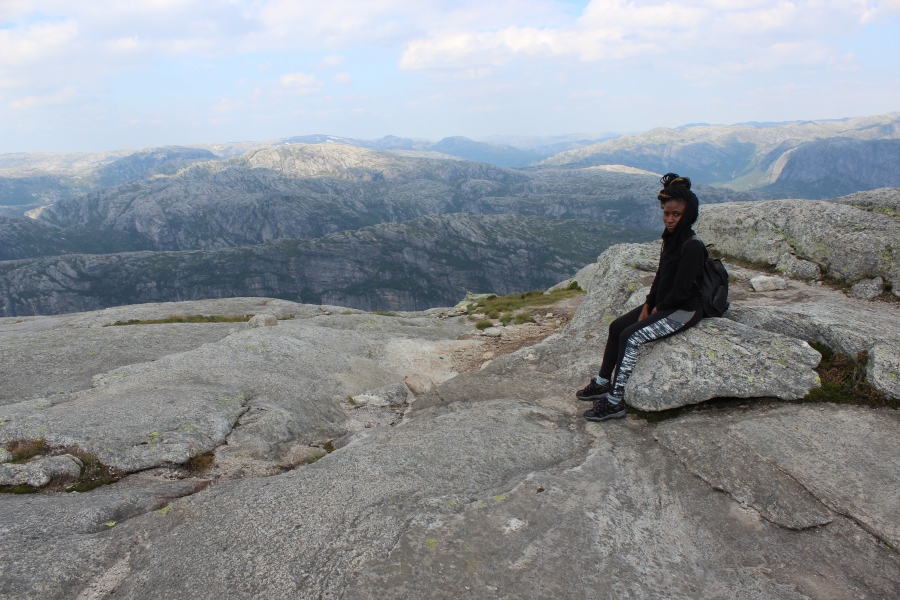 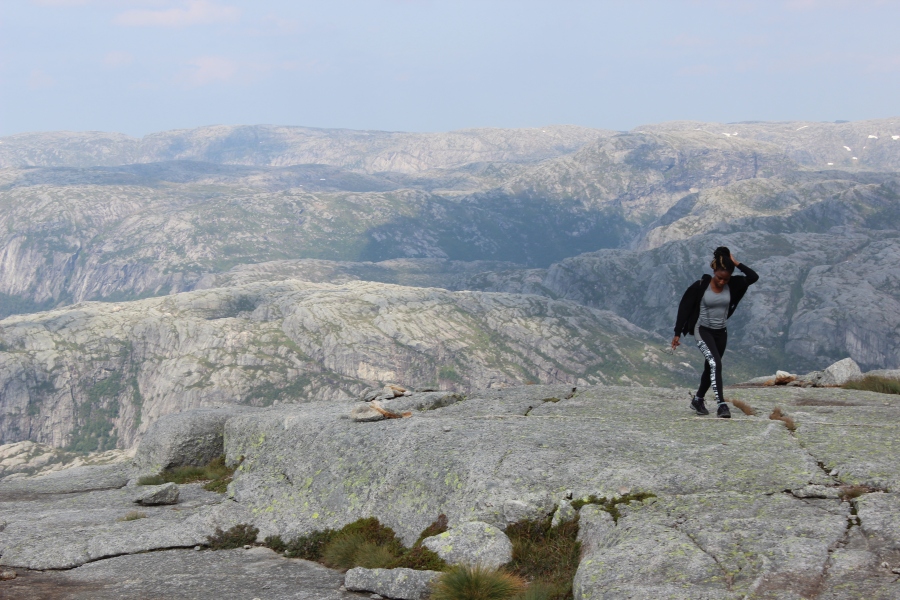 ” Are we almost there?” Usual question we asked returning Hikers

This one was a killer!! Time to crawl. 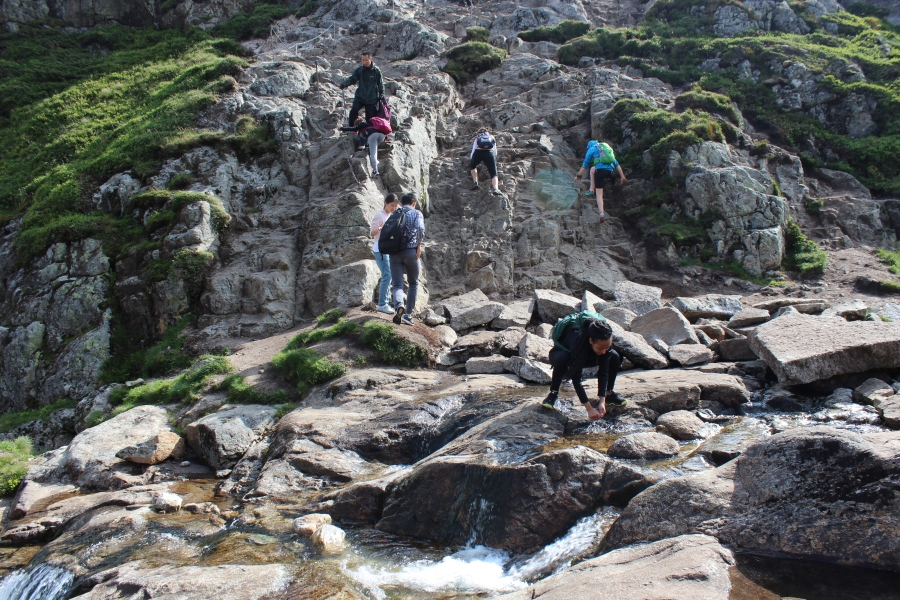 Finally!! The Boulder. This was what we hiked 3 hours for ? 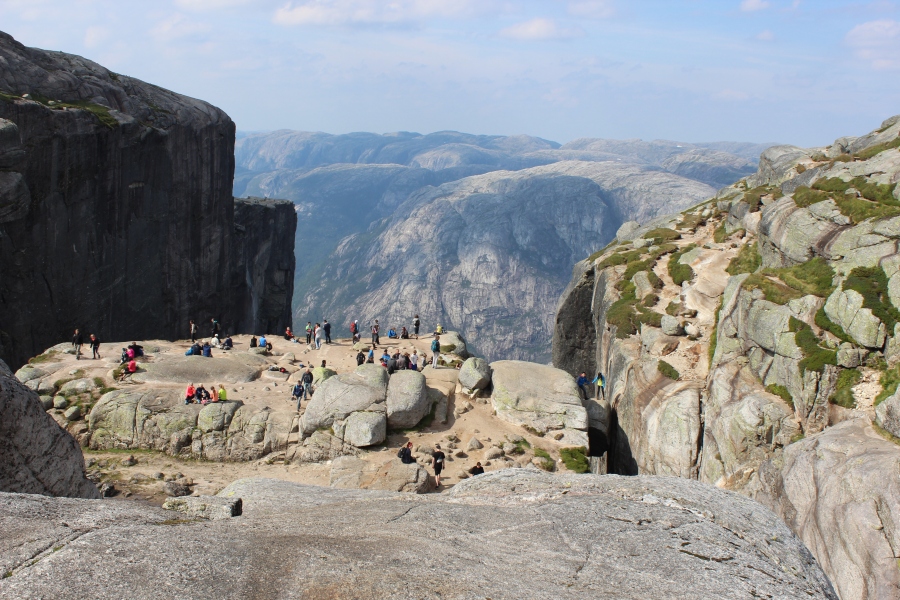 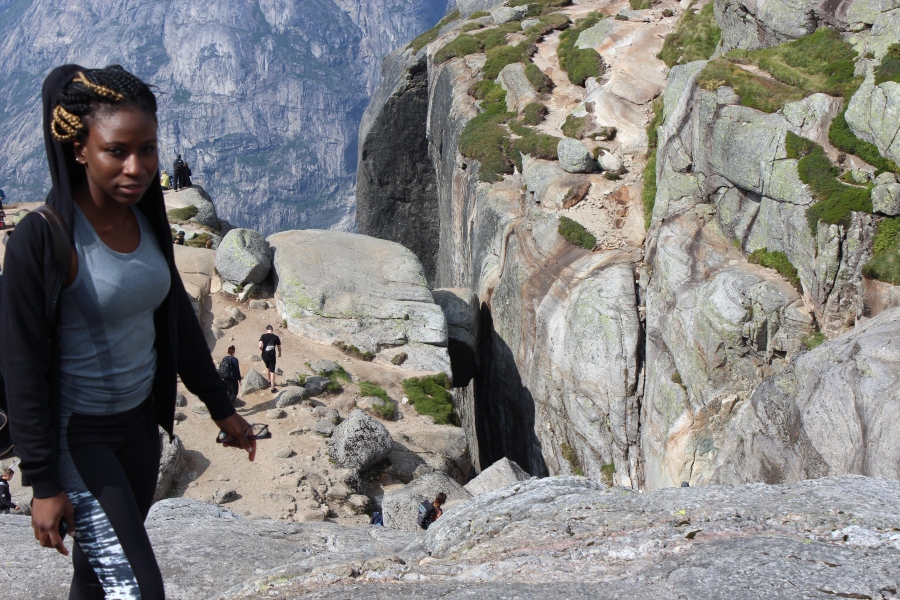 Time to step on the Boulder NAAh! Standing is mediocre Time to use it as a leg rest! ( not that I was scared or anything).

There were people doing all sorts of things on there;

There were those that stood on it, like my friend Femi, 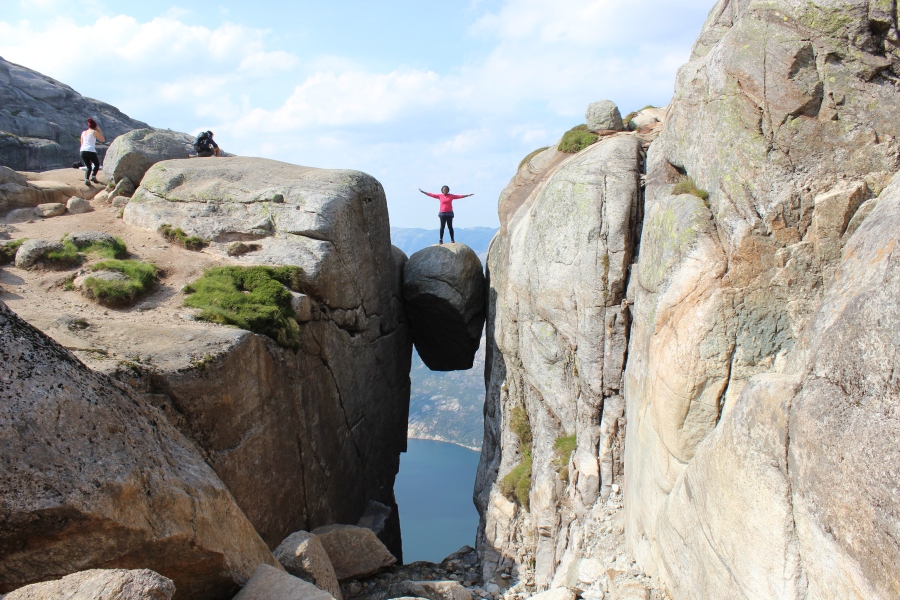 Someone doing press-ups. Mate, my heart was racing ahh! 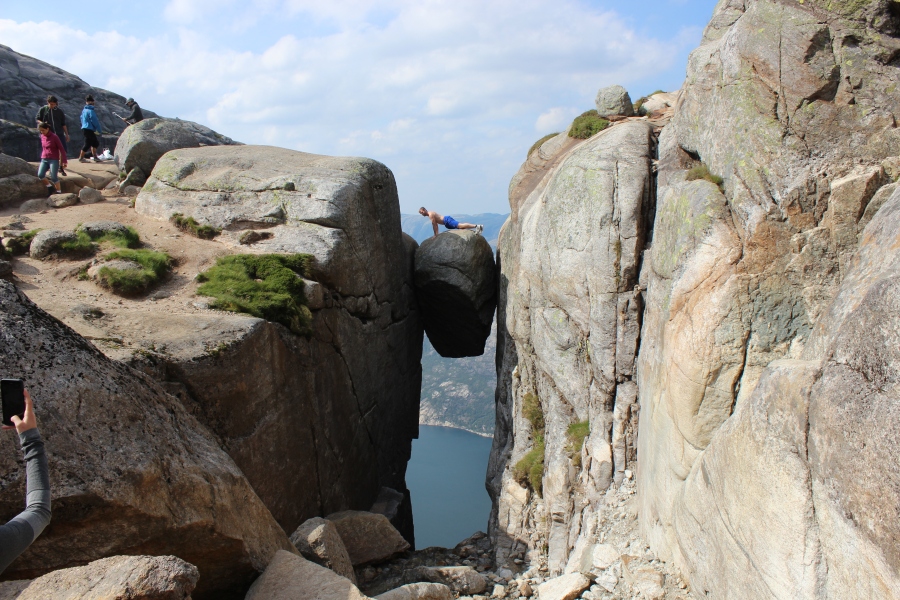 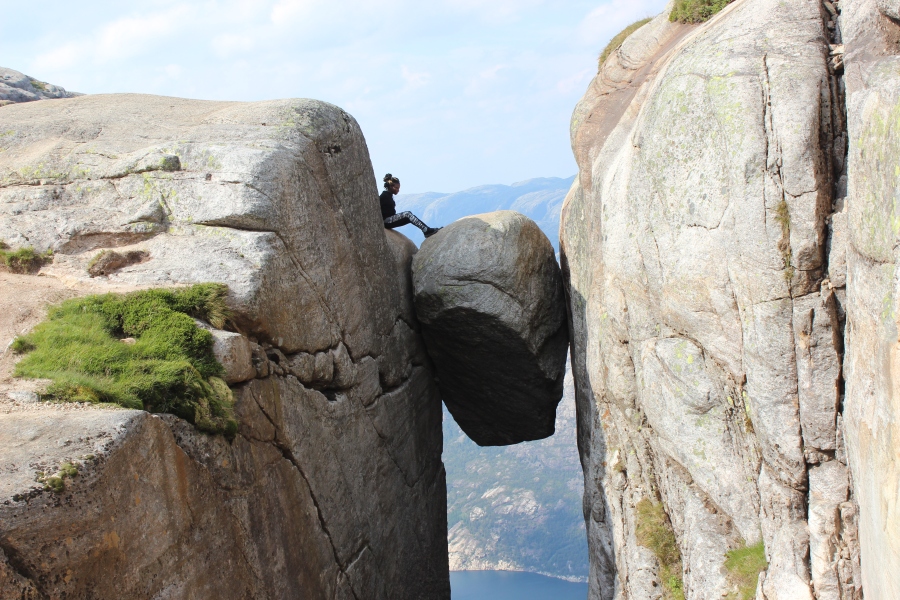 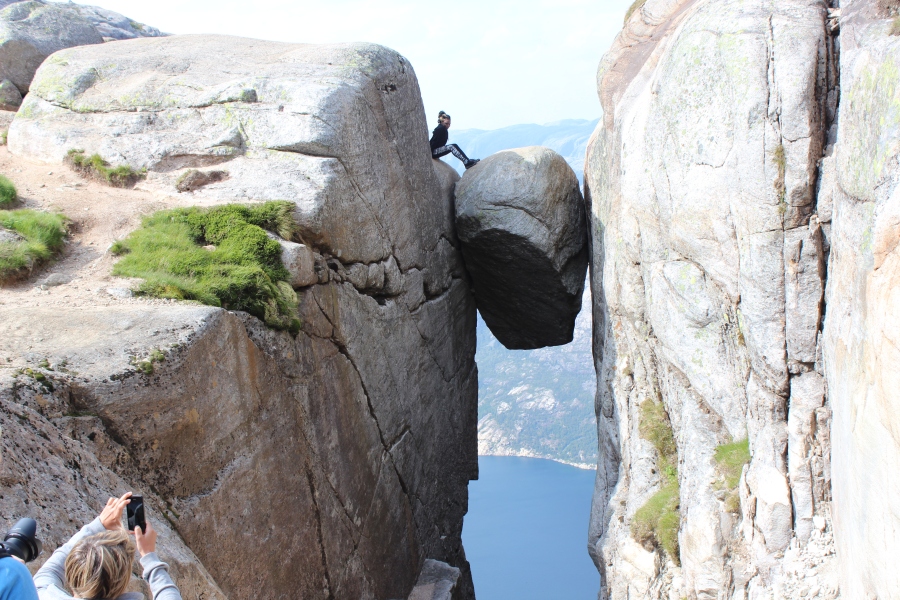 By The Way! The other side of the Boulder( where you queue to step on it) is super steep! You have a few centimetres of space to stand; you then have to make a sharp turn and then step on the boulder.  It is Scary AF! Forgot how websites likes lonely planet, Pinterest, Buzzfeed sell dreams. AHH! I wasn’t readyyyyyyyy

This was my far one of the most adventurous things I have ever done. You have to keep pushing yourself and you are not even sure how you are going to feel on the other side, but you do it anyway!

Now time to head back

I must mention that this was a lot harder than climbing up.

My feet! Oh! They were hurting! I guess it’s because I had to constantly push forward as we climb/hike back down. 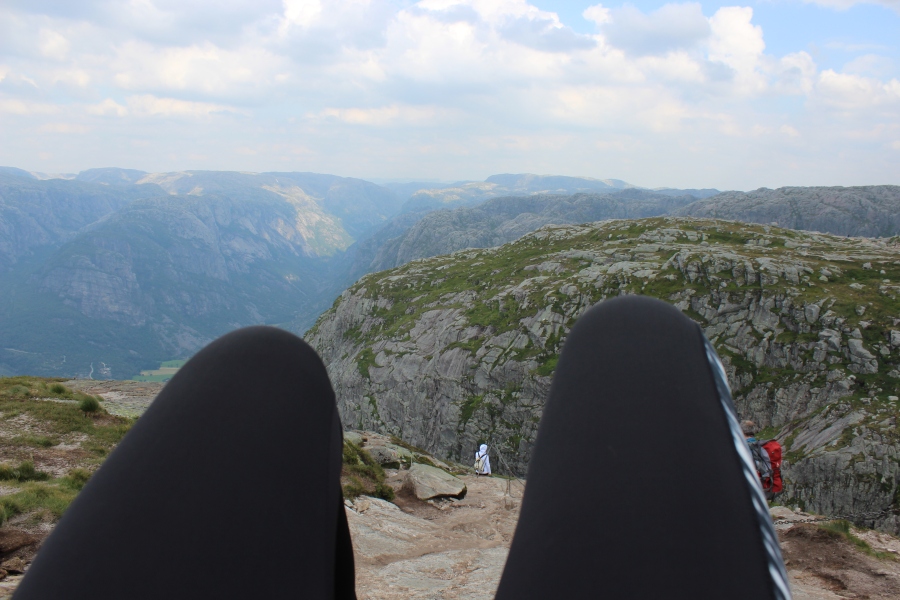 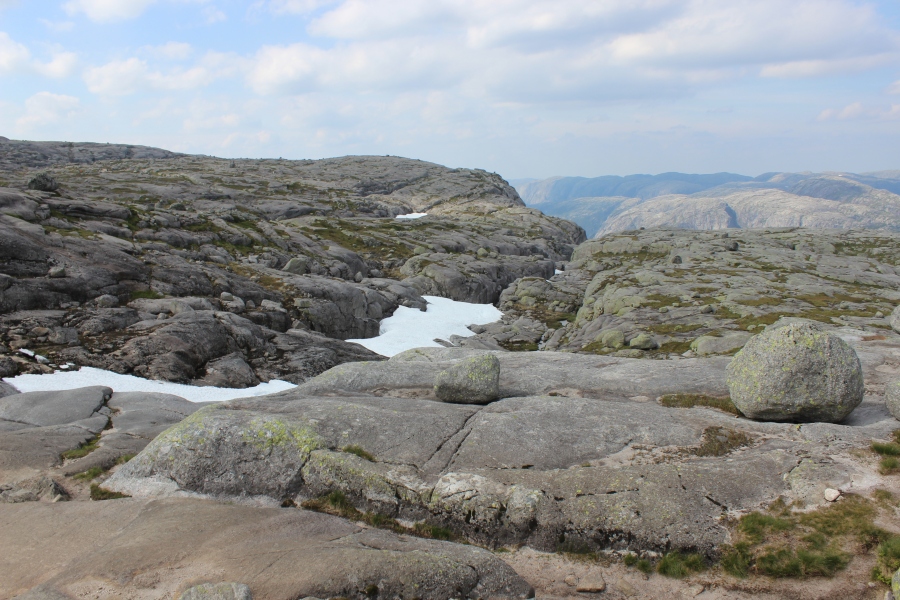 I also managed to sneak in some candid shots of other hikers. 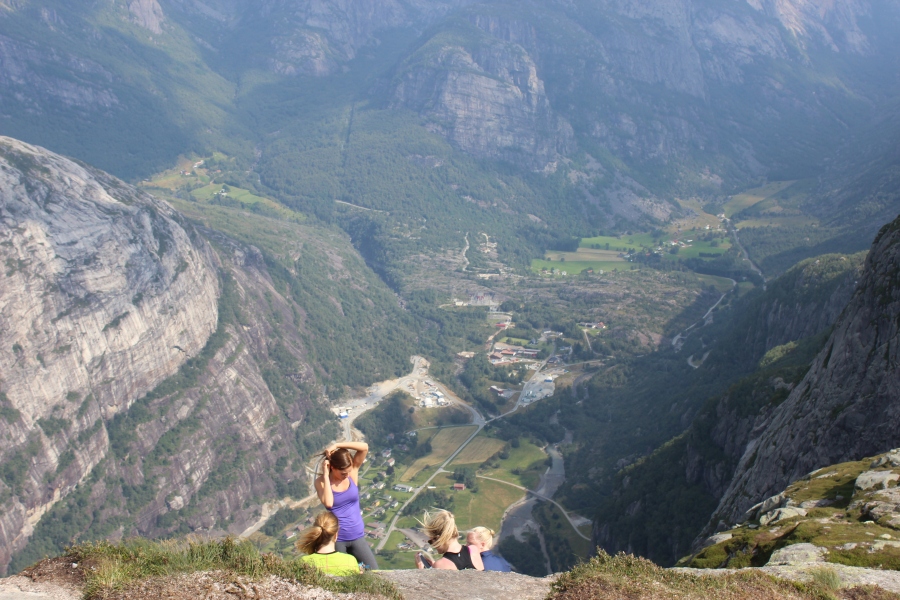 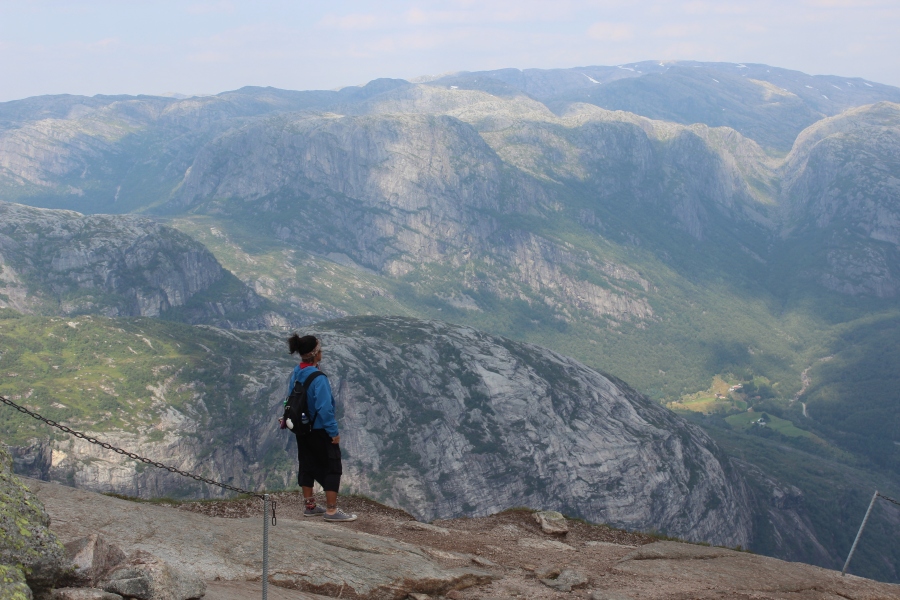 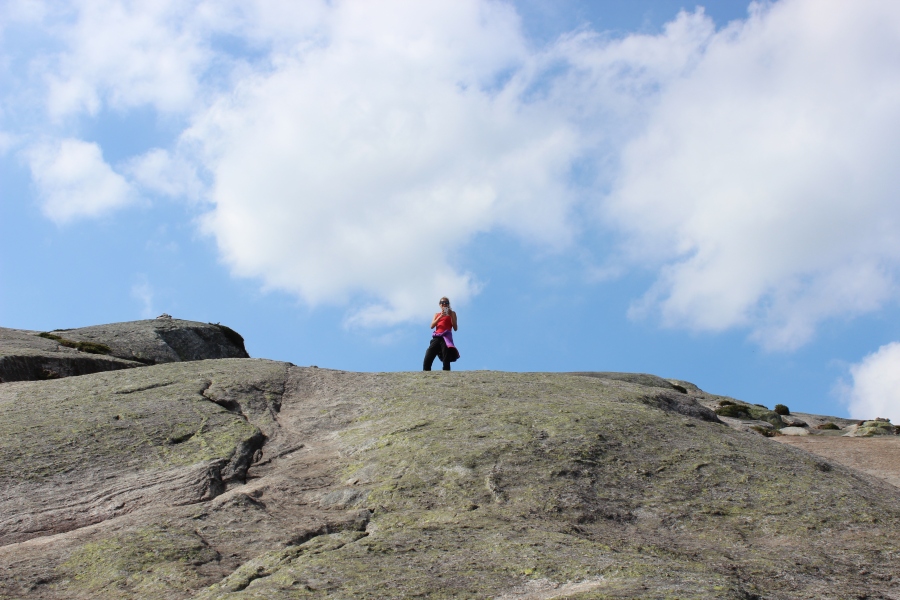 Also made new friends, one of which saved up for 6 years and is currently on a solo road trip around Europe, she is driving  on her own around Europe and  mentioned that Norway is her favorite so far. I can see why! . Here she is in the picture below :p 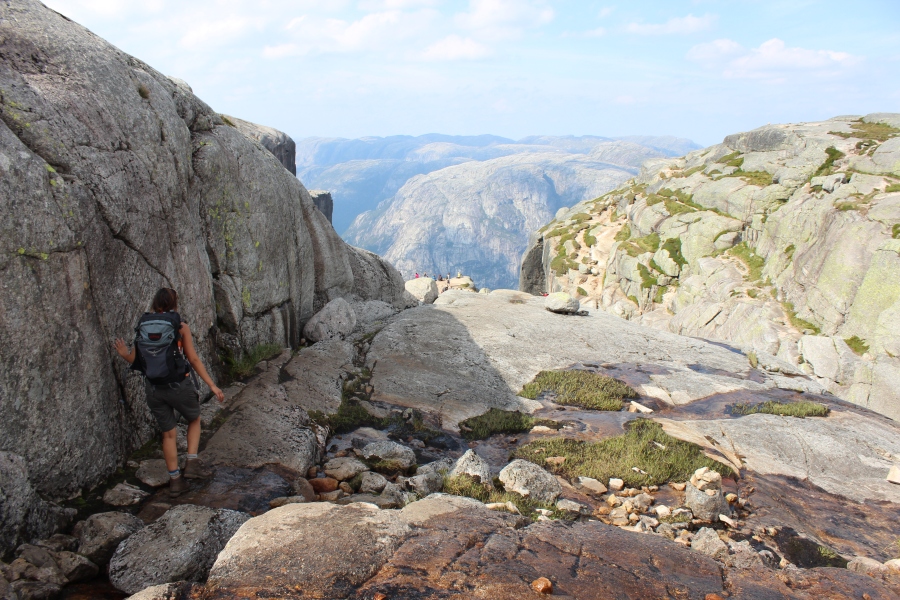 We just managed to make the bus back to Stavanger .The driver was more than happy to let me seat in front right next to him on the journey back. He was also very optimistic and positive about his country, Norway, he pointed out some historical spots and some fun facts to me as we drove though the curvy roads. As a road lover, this was a blessing, awesome narrow and curvy roads, up and down hills. What better way to reflect on the day’s adventure? 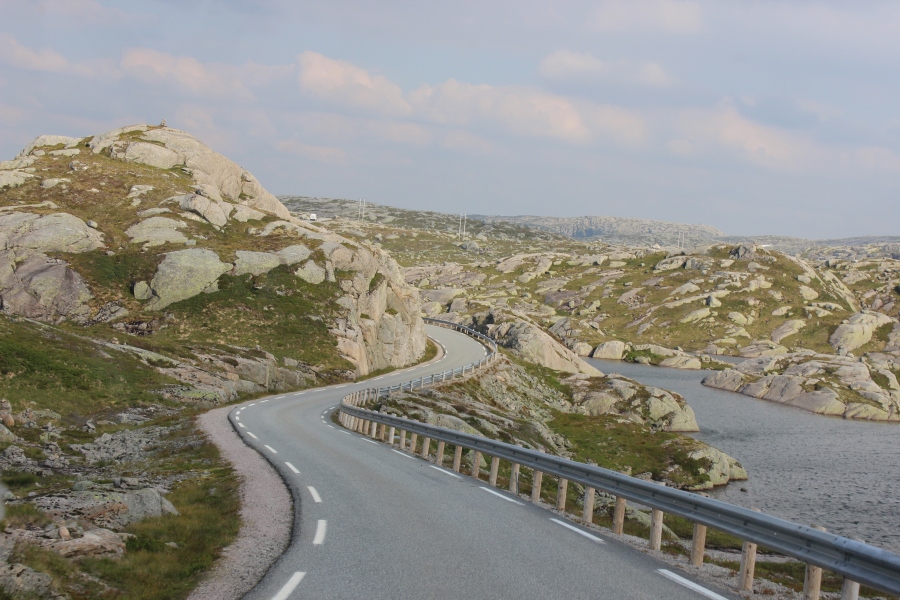 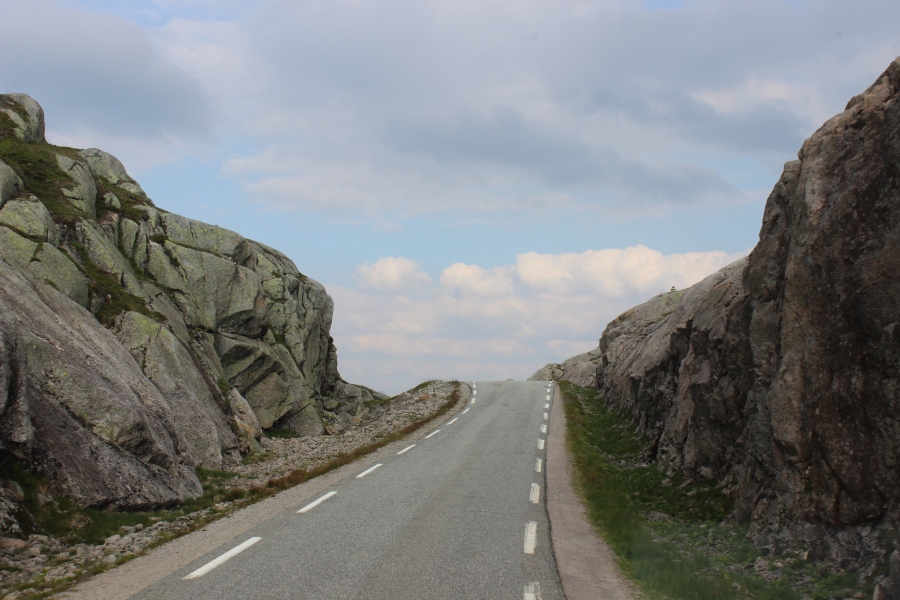 Would you go on this adventure? Let me hear your thoughts.

Do you have any questions about this trip? Feel free to comment and subscribe below for more crazy trips and tricks.

Wow, what a scenic hike.

Of Work and Journiesreply
– In reply to: Fisayo

It was ! Thank you

Yess yass! Seems exciting & very challenging! It’s awesome how people learn a lot on a roadtrip! I laughed at the fact that the Boulder scared the shii outta you*lool* heaven says don’t be scared baby,i got you*

Of Work and Journiesreply
– In reply to: Deola

Lol thank you ! Haha I was scared but it was worth. You should totally go on a road trip too. Thank you

Road to Pulpit Rock ( Preikestolen), Norway | Of Work and Journiesreply

[…] I have already talked about the first part of the trip, you can catch that here. […]

OMG! This is something I have always wanted to do! Totally love this piece! We would like to feature this on our platform 😁😁😁.

Of Work and Journiesreply
– In reply to: Naija Nomads

Thank you. Please go ahead and let me know when you do. I love the features on your platform too. And Norway is a MUST visit. When next I’m there, I would love to do a Caravan road trip and stop at mountains, lakes etc , it is one of the only places in the world where you can settle in scenic areas freely!